The Fort Peck Dam is the highest of six major dams along the Missouri River, located in northeast Montana in the United States, near Glasgow, and adjacent to the community of Fort Peck. At 21,026 feet (6,409 m) in length and over 250 feet (76 m) in height, it is the largest hydraulically filled dam in the United States, and creates Fort Peck Lake, the fifth largest man-made lake in the U.S., more than 130 miles (210 km) long, 200 feet (61 m) deep, and it has a 1,520-mile (2,450 km) shoreline which is longer than the state of California’s coastline. 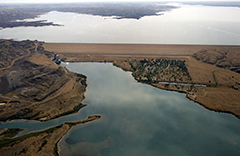 The Fort Peck dam lies within the Charles M. Russell National Wildlife Refuge. The dam and the 134-mile-long (216 km) lake are owned and operated by the U.S. Army Corps of Engineers and exist for the purposes of hydroelectric power generation, flood control, and water quality management.