The Taum Sauk pumped storage plant is in the St. Francois mountain region of the Missouri Ozarks about 90 miles (140 km) south of St. Louis near Lesterville, Missouri, in Reynolds County. It is operated by Ameren Missouri (previously AmerenUE, formerly Union Electric). 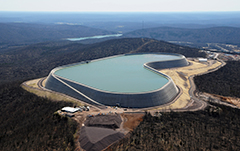 The pumped-storage hydroelectric plant was constructed from 1960-1962 and was designed to help meet daytime peak electric power demand. It began operation in 1963. Electrical generators are turned by water flowing from a reservoir on top of Proffit Mountain into a lower reservoir on the East Fork of the Black River. At night, excess electricity on the power grid is used to pump water back to the mountaintop.

The Taum Sauk plant is an open-loop pure pumped operation: unlike some other pumped storage sites, there is no natural primary flow into the upper reservoir available for generation. It is therefore a net consumer of electricity; the laws of thermodynamics dictate that more power is used to pump the water up the mountain than is generated when it comes down. However, the plant is still economical to operate because the upper reservoir is refilled at night, when the electrical generation system is running at low-cost baseline capacity. This ability to store huge amounts of energy led its operator to call Taum Sauk "the biggest battery that we have".

On December 14, 2005, a catastrophic failure in the upper reservoir dam put the plant out of operation until it was rebuilt, recertified, and reopened on April 21, 2010. The new upper reservoir dam, rebuilt from the ground up, is the largest roller-compacted concrete dam in North America. 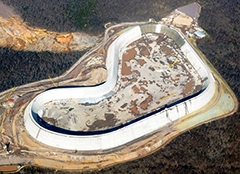 Federal regulators approved Ameren's plan to rebuild the reservoir, and construction began in late 2007. The rebuilt structure is made entirely of roller-compacted concrete, unlike the earth-fill original. In addition to better fill-detection instrumentation, it incorporates a spillway rated to handle overflow equal to the maximum capacity of both pumping units and a video system to monitor the water level. The $490 million cost of rebuilding the reservoir was covered partially by insurance. The utility was prohibited from billing customers to recoup any of the cost.

Water was pumped into the rebuilt reservoir for the first time on February 27, 2010, and engineers monitored the response of the new structure as the water level was repeatedly raised and lowered. The final approval required from the FERC for “return to normal project operations” was received on April 1, 2010. The utility met the Missouri Public Service Commission’s in-service criteria for operations on April 15, and electricity was first generated from the new structure on April 21, 2010. The new dam was recognized by the U.S. Society on Dams with its "Award of Excellence in the Constructed Project". On September 27, 2010, IEEE rededicated the plant as an IEEE milestone. More details