The Antonov An-124 Ruslan is a strategic airlift quadjet. It was designed in the 1980s by the Antonov design bureau in the Ukrainian SSR, then part of the Soviet Union (USSR). Until the Boeing 747-8F, the An-124 was, for thirty years, the world’s heaviest gross weight production cargo airplane and second heaviest operating cargo aircraft, behind the one-off Antonov An-225 (a greatly enlarged design based on the An-124). The An-124 remains the largest military transport aircraft in current service. The lead designer of the An-124 (and the An-225) was Viktor Tolmachev. 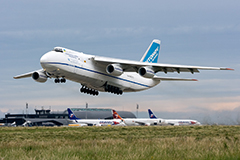 During development it was known as Izdeliye 400 (Product #400) in house, and An-40 in the West. First flown in 1982, civil certification was issued on 30 December 1992. In July 2013, 26 An-124s were in commercial service with 10 on order. In August 2014, it was reported that plans to resume joint production of the Antonov An-124 had been shelved due to the ongoing political tensions between Russia and Ukraine. The sole remaining production facility is Russia’s Aviastar-SP in Ulianovsk.

The various operators of the An-124 are in discussions with respect to the continuing airworthiness certification of the individual An-124 planes. The original designer of the An-124 is responsible for managing the certification process for its own products, but Russian/Ukrainian conflicts are making this process difficult to manage. Military operators are able to self-certify the airworthiness of their own aircraft, but Russian civil operators must find a credible outside authority for certification if Ukraine is unable to participate in the process. 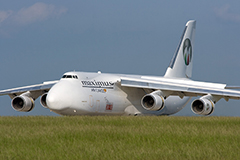 Externally, the An-124 is similar to the American Lockheed C-5 Galaxy, having a double fuselage to allow for a rear cargo door (on the lower fuselage) that can open in flight without affecting structural integrity. It is slightly shorter, with a slightly greater wingspan, and a 25% larger payload. Instead of the Galaxy’s T-tail, the An-124 uses a conventional empennage, similar in design to that of the Boeing 747. The An-124’s main engine is the Lotarev D-18 (238–250 kN).

The aircraft uses oleo strut suspension for its 24 wheels. The suspension has been calibrated to allow landing on rough terrain and is able to kneel to allow easier front loading. The plane has an onboard overhead crane capable of lifting up to 30 tonnes of cargo, and items up to 120 tonnes can be winched on board.