The Eurasia Tunnel (Avrasya Tüneli) is a road tunnel in Istanbul, Turkey, crossing underneath the Bosphorus strait. The tunnel was officially opened on 20 December 2016 and opened to traffic on 22 December 2016. 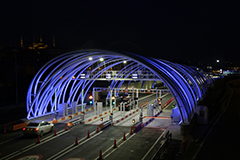 The 5.4 km (3.4 mi) double-deck tunnel connects Kumkapı on the European part and Koşuyolu, Kadıköy, on the Asian part of Istanbul with a 14.6 km (9.1 mi) route including the tunnel approach roads. It crosses the Bosphorus beneath the seabed at a maximum depth of −106 m. It is about 1 km south of the undersea railway tunnel Marmaray, which was opened on 29 October 2013. The journey between the two continents takes about 5 minutes. Toll is collected in both directions; as of 2018, ₺19.20 (about $4 US) for cars and ₺28.80 ($6 US) for minibuses.

The American firms Parsons Brinckerhoff and HNTB were responsible for the design, while the British Arup Group and American Jacobs Engineering Group undertook the technical and traffic studies. The geotechnical survey was by the Dutch consultancy Fugro. The tunnel boring machine (TBM) was supplied by the German manufacturer Herrenknecht. The Italian company Italferr was in charge of works management and project review on behalf of Administration. The French company Egis Group will be in charge of the operation and maintenance.

The tunnel alignment is located in a seismically active region, about 17 km to the North Anatolian Fault Zone. To decrease the seismic stresses/strains below the permissible levels, two flexible seismic joints/segments; with displacement limits of ±50 mm for shear and ±75 mm for extraction/contraction; were innovated, designed specially, localized through geological/geophysical/geotechnical conditions, tested in laboratory; implemented ‘first time’ in TBM tunnelling under similar severe conditions. The design earthquake magnitude was specified as moment magnitude of 7.25 and design of functional and safety evaluation earthquakes have a return period of 500 and 2,500 years, respectively. Seismic joint locations defined during design phase were verified through continuous monitoring of cutterhead torques. More details