The Lancaster Canal is a canal in North West England, originally planned to run from Westhoughton in Lancashire to Kendal in south Cumbria (historically in Westmorland). The section around the crossing of the River Ribble was never completed, and much of the southern end leased to the Leeds and Liverpool Canal, of which it is now generally considered part. 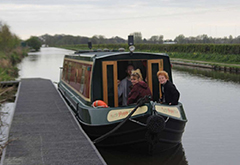 Of the canal north of Preston, only the section from Preston to Tewitfield near Carnforth in Lancashire is currently open to navigation for 42 miles (67.6 km), with the canal north of Tewitfield having been severed in three places by the construction of the M6 motorway, and by the A590 road near Kendal. The southern part, from Johnson’s Hillock to Aspull, remains navigable as part of the Leeds and Liverpool Canal. The planned continuation to Westhoughton was never built.

The line of the canal was first surveyed by Robert Whitworth in 1772. In 1791, John Longbotham, Robert Dickinson and Richard Beck resurveyed the proposed line, and a final survey was carried out later the same year by John Rennie.

In 1792 the promoters sought an Act of Parliament urgently, as proposals by the Leeds and Liverpool Canal to alter their route would have affected the profitability of the southern section. It received the Royal Assent on 11 June 1792, and was entitled An Act for making and maintaining a navigable canal, from Kirkby Kendal in the county of Westmorland, to West Houghton in the county palatine of Lancaster, and also a navigable branch from the said intended canal at or near Barwick, to or near Warton Cragg, and also another navigable branch, from, at or near, Galemoss, by Chorley, to or near Duxbury in the said county palatine of Lancaster.

The Act created the Company of Proprietors of the Lancaster Canal Navigation, and gave them powers to raise £414,100 by the issuing of shares, and an additional £200,000, either by mortgage or by issuing more shares, if required. John Rennie was appointed as engineer in July 1792, with William Crossley the elder as his assistant, and Archibald Millar as resident engineer and superintendent. A second Act of Parliament was obtained in May 1793 to authorise the construction of the Glasson branch, so that the canal had a connection to the sea. More details

The Great Wall of Louisiana