A catapult is a ballistic device used to launch a projectile a great distance without the aid of explosive devices—particularly various types of ancient and medieval siege engines. In use since ancient times, the catapult has proven to be one of the most effective mechanisms during warfare. In modern times the term can apply to devices ranging from a simple hand-held implement to a mechanism for launching aircraft from a ship. 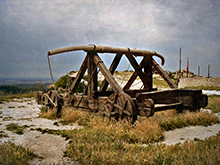 The last large scale military use of catapults was during the trench warfare of World War I. During the early stages of the war, catapults were used to throw hand grenades across no man’s land into enemy trenches. They were eventually replaced by small mortars.

In the 1840s the invention of vulcanized rubber allowed the making of small hand-held catapults, either improvised from Y-shaped sticks or manufactured for sale; both were popular with children and teenagers. These devices were also known as slingshots in the USA.

Special variants called aircraft catapults are used to launch planes from land bases and sea carriers when the takeoff runway is too short for a powered takeoff or simply impractical to extend. Ships also use them to launch torpedoes and deploy bombs against submarines. Small catapults, referred to as “traps”, are still widely used to launch clay targets into the air in the sport of clay pigeon shooting.

An aircraft catapult consists of a track built into the flight deck, below which is a large piston or shuttle that is attached through the track to the nose gear of the aircraft, or in some cases a wire rope called a catapult bridle is attached to the aircraft and the catapult shuttle. More details