Biomass is an industry term for getting energy by burning wood, and other organic matter. Burning biomass releases carbon emissions, but has been classed as a renewable energy source in the EU and UN legal frameworks, because plant stocks can be replaced with new growth. It has become popular among coal power stations, which switch from coal to biomass in order to convert to renewable energy generation without wasting existing generating plant and infrastructure. 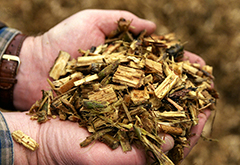 Biomass most often refers to plants or plant-based materials that are not used for food or feed, and are specifically called lignocellulosic biomass. As an energy source, biomass can either be used directly via combustion to produce heat, or indirectly after converting it to various forms of biofuel. Conversion of biomass to biofuel can be achieved by different methods which are broadly classified into: thermal, chemical, and biochemical. Some chemical constituents of plant biomass include lignins, cellulose, and hemicellulose.

A biomass-fired power plant produces electricity and heat by burning biomass in a boiler. The most common types of boilers are hot water boilers and steam boilers. Wood chips, residues and other types of biomass are used in the boilers, in the same way as coal, natural gas and oil. Fuel is stored in a bunker for further transport to the boiler. In the boiler, water is heated to high temperature under pressure. Steam from the boiler powers the turbine, which is connected to the generator. More details