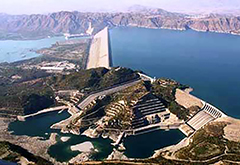 The main dam wall, built of earth and rock fill, stretches 2,743 metres (8,999 ft) from the island to river right, standing 148 metres (486 ft) high. A pair of concrete auxiliary dams spans the river from the island to river left. The dam's two spillways are on the auxiliary dams rather than the main dam. The main spillway has a discharge capacity of 18,406 cubic metres per second (650,000 cu ft/s) and the auxiliary spillway, 24,070 cubic metres per second (850,000 cu ft/s). Annually, over 70% of water discharged at Tarbela passes over the spillways and is not used for hydropower generation.

The dam is 485 feet (148 m) high above the riverbed. It forms the Tarbela Reservoir, with a surface area of approximately 250 square kilometres (97 sq mi). The dam was completed in 1976 and was designed to store water from the Indus River for irrigation, flood control, and the generation of hydroelectric power.

Its primary use is electricity generation. The installed capacity of the 3,478 MW Tarbela hydroelectric power stations will increase to 6,298MW after completion of the ongoing fourth extension and the planned fifth extension financed by Asian Infrastructure Investment Bank and the World Bank. More details