The Point Pleasant Bridge (Silver Bridge) was an eyebar-chain suspension bridge built in 1928 and named for the color of its aluminum paint. The bridge carried U.S. Route 35 over the Ohio River, connecting Point Pleasant, West Virginia, and Gallipolis, Ohio. 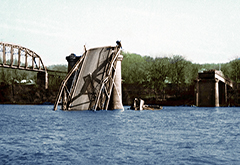 On December 15, 1967, the Silver Bridge collapsed while it was full of rush-hour traffic, resulting in the deaths of 46 people. Two of the victims were never found. Investigation of the wreckage pointed to the cause of the collapse being the failure of a single eyebar in a suspension chain, due to a small defect 0.1 inches (2.5 mm) deep. Analysis showed that the bridge was carrying much heavier loads than it had originally been designed for and had been poorly maintained.

The collapsed bridge was replaced by the Silver Memorial Bridge, which was completed in 1969.

The collapse inspired legislation to ensure that older bridges were regularly inspected and maintained; however, aging infrastructure is still a problem in the United States. In 1983 the Mianus River Bridge in Greenwich, Connecticut, collapsed, causing the deaths of three drivers. The I-35W Mississippi River bridge disaster in 2007 resulted in 13 deaths. In early September 2009, the failure of an eyebar in the San Francisco–Oakland Bay Bridge was discovered during a scheduled closure, resulting in an emergency repair to reinforce the failed member. More details