Harry Wexler is one of the first scientists to envision using satellites for meteorological purposes; he is remembered as the father of the TIROS weather satellite. Tiros 1, was launched into low Earth orbit on 1 April 1960 to become the world’s first meteorological satellite. During its 77-day lifetime it returned 22 952 pictures. Despite its low resolution, the video camera showed clearly that Earth’s cloud cover was organised through patterns on a global scale, corresponding to major weather systems. Tiros 2 followed in November, too late for the 1960 hurricane season but ready for operation when the 1961 season began. From now on, tropical storms would no longer strike by surprise. More details 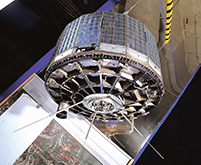 The weather satellite is a type of satellite that is primarily used to monitor the weather and climate of the Earth. Satellites can be polar orbiting, covering the entire Earth asynchronously, or geostationary, hovering over the same spot on the equator.

Other environmental satellites can detect changes in the Earth’s vegetation, sea state, ocean color, and ice fields. For example, the 2002 Prestige oil spill off the northwest coast of Spain was watched carefully by the European ENVISAT, which, though not a weather satellite, flies an instrument (ASAR) which can see changes in the sea surface.