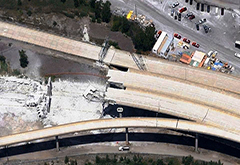 On April 15, 1982, part of a ramp under construction collapsed during concrete pouring operations near the Indiana Harbor and Ship Canal, killing fourteen highway workers and injuring eighteen more. In 1987, the state designated the route between US 12 and the Indiana Toll Road as the Highway Construction Workers Memorial Highway.

On December 28, 2009, the Indiana Department of Transportation (INDOT) closed the elevated bridge portion of Cline Avenue between Calumet and Michigan avenues, a distance of nearly 3.5 miles (5.6 km). Corrosion had severely weakened most elements of the bridge, including the bridge piers, concrete, beams and cables. The bridge has been torn down and will be replaced with a toll crossing. Similar cases of corrosion have been identified in other bridges across the country. More details