The Lacey V. Murrow Memorial Bridge is one of the Interstate 90 floating bridges that carries the eastbound lanes of Interstate 90 across Lake Washington from Seattle to Mercer Island, Washington. Westbound traffic is carried by the Homer M. Hadley Memorial Bridge running parallel to it. The Lacey V. Murrow Memorial Bridge is the second-longest floating bridge on Earth at 6,620 ft (2,020 m), whereas the longest is the Governor Albert D. Rosellini Bridge—Evergreen Point just a few miles to the north on the same lake, opened 76 years later. The third-longest is the Hood Canal Bridge, also in Washington State, about 30 miles (48 km) to the northwest of the Evergreen Point Floating Bridge. 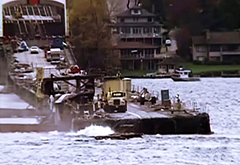 In 1990, while under re-construction, the original bridge sank because of a series of human errors and decisions. The process started because the bridge needed resurfacing and was to be widened by means of cantilevered additions in order to meet the necessary lane-width specifications of the Interstate Highway System. The Washington State Department of Transportation (WSDOT) decided to use hydrodemolition (high-pressure water) to remove unwanted material (the sidewalks on the bridge deck). Water from this hydrodemolition was considered contaminated under environmental law and could not be allowed to flow into Lake Washington. Engineers then analyzed the pontoons of the bridge, and realized that they were over-engineered and the water could be stored temporarily in the pontoons. The watertight doors for the pontoons were therefore removed.

A large storm on November 22–24, 1990 (the Thanksgiving holiday weekend) filled some of the pontoons with rain and lake water. On November 24, workers noticed that the bridge was about to sink, and started pumping out some of the pontoons. However, on November 25, 2,790 ft (850 m) of the bridge sank, dumping the contaminated water into the lake along with tons of bridge material. The bridge sank when one pontoon filled and dragged the rest down because they were cabled together and there was no way to separate the sections under load. No one was hurt or killed, since the bridge was closed for renovation and the sinking took some time. All of the sinking was captured on film and shown on live TV. The cost of the disaster was $69 million in damages.

The disaster delayed the bridge's reopening by 14 months, to September 1993. More details