The Mianus River Bridge is a span that carries Interstate 95 over the Mianus River in the Cos Cob section of Greenwich, Connecticut. It is the second bridge on the site. The original bridge collapsed in 1983, killing three motorists. The replacement span is officially named the Michael L. Morano Bridge, after a state senator who represented Greenwich. 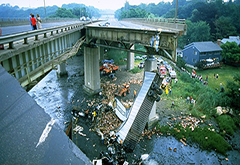 The collapse was caused by the failure of two pin and hanger assemblies that held the deck in place on the outer side of the bridge, according to an investigation by the National Transportation Safety Board. Rust formed within the bearing of the pin, exerting a force on the hanger which was beyond design limits for the retaining clamps. It forced the hanger on the inside part of the expansion joint at the southeast corner off the end of the pin that was holding it, and the load was shifted to outside hanger. The extra load on the remaining hanger started a fatigue crack at a sharp corner on the pin. When it failed catastrophically, the deck was supported at just three corners. When two heavy trucks and a car entered the section, the remaining expansion joint failed, and the deck crashed into the river below.

The ensuing investigation cited corrosion from water buildup due to inadequate drainage as a cause. During road mending some 10 years before, the highway drains had been deliberately blocked and the crew failed to unblock them when the road work was completed. Rainwater leaked down through the pin bearings, causing them to rust. The outer bearings were fracture-critical and non-redundant, a design flaw of this particular type of structure. The bearings were difficult to inspect close-up, although traces of rust could be seen near the affected bearings.

The incident was also blamed on inadequate inspection resources in the state of Connecticut. At the time of the disaster, the state had just 12 engineers, working in pairs, assigned to inspect 3,425 bridges. The collapse came despite the nationwide inspection procedures brought about by the collapse of the Silver Bridge in West Virginia in December 1967. More details