The Verrazzano-Narrows Bridge is a double-decked suspension bridge that connects the New York City boroughs of Staten Island and Brooklyn and is named for Giovanni da Verrazzano. It spans the Narrows, a body of water linking the relatively enclosed Upper New York Bay with Lower New York Bay and the Atlantic Ocean. The bridge carries thirteen lanes of Interstate 278, with seven lanes on the upper level and six on the lower level. In 1524, da Verrazzano became the first documented European explorer to enter New York Harbor and the Hudson River. 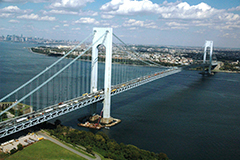 The Verrazzano-Narrows Bridge has a central span of 4,260 feet (1,298 m). It was the longest suspension bridge in the world from 1964 until it was surpassed by the Humber Bridge in the United Kingdom in 1981. The bridge has the 13th longest main span in the world, as well as the longest in the Americas. The bridge marks the gateway to New York Harbor. All ships arriving at the Port of New York and New Jersey pass underneath the bridge and must therefore be built to accommodate the clearance under it.

Because of a naming error in the original construction contract, the bridge's name was originally spelled "Verrazano-Narrows Bridge" with only one "z" when it was officially named in 1960, despite the explorer's name having two "z"s. In October 2018, after the bridge had been spelled incorrectly spelled for 58 years, the name of the bridge was officially corrected to "Verrazzano-Narrows Bridge". More details