The Shanghai World Financial Center is a supertall skyscraper located in the Pudong district of Shanghai, China. It was designed by Kohn Pedersen Fox and developed by the Mori Building Company, with Leslie E. Robertson Associates as its structural engineer and China State Construction Engineering Corp and Shanghai Construction (Group) General Co. as its main contractor. It is a mixed-use skyscraper, consisting of offices, hotels, conference rooms, observation decks, and ground-floor shopping malls. Park Hyatt Shanghai is the tower's hotel component, comprising 174 rooms and suites occupying the 79th to the 93rd floors, which at the time of completion was the highest hotel in the world. It is now the third-highest hotel in the world after the Ritz-Carlton, Hong Kong, which occupies floors 102 to 118 of the International Commerce Centre. 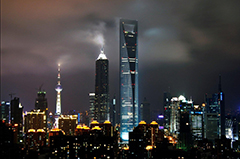 On 14 September 2007, the skyscraper was topped out and is 492 metres (1,614.2 ft), making it the 9th tallest building in the world and the fourth tallest structure in Mainland China. The SWFC opened to the public on 28 August 2008, with its observation deck opening on 30 August. The observation deck offers views from 474 m (1,555 ft) above ground level.

The SWFC has been lauded for its design, and in 2008 it was named by architects as the year's best-completed skyscraper. In 2013, the SWFC was exceeded in height by the adjacent Shanghai Tower, which is China's tallest structure as of 2017. Together, the Shanghai World Financial Center, Shanghai Tower and Jin Mao Tower form the world's first adjacent grouping of three supertall skyscrapers.

Carol Willis, head of New York's Skyscraper Museum, stated: "The simplicity of its form as well as its size dramatizes the idea of the skyscraper." Architect Tim Johnson noted its innovative structural design: "Steel trusses guard against the forces of wind and earthquake and made the building lighter, made it use less steel, and contributed to its sustainability." Johnson described the SWFC's structure as "nothing short of genius". More details