The Tupolev Tu-95 (The Bear) is a large, four-engine turboprop-powered strategic bomber and missile platform. First flown in 1952, the Tu-95 entered service with the Soviet Union in 1956 and is expected to serve the Russian Air Force until at least 2040. A development of the bomber for maritime patrol is designated Tu-142, while a passenger airliner derivative was called Tu-114. 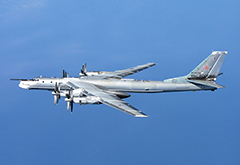 The aircraft has four Kuznetsov NK-12 engines with contra-rotating propellers. It is the only propeller-powered strategic bomber still in operational use today. The Tupolev Tu-95 bomber is one of the loudest military aircraft, particularly because the tips of the propeller blades move faster than the speed of sound. Its distinctive swept-back wings are set at an angle of 35°. The Tu-95 is unique as a propeller-driven aircraft with swept wings that has been built in large numbers.

Like its American counterpart, the Boeing B-52 Stratofortress, the Tupolev Tu-95 bomber has continued to operate in the Russian Air Force while several subsequent iterations of bomber design have come and gone. Part of the reason for this longevity was its suitability, like the B-52, for modification to different missions. Whereas the Tu-95 was originally intended to drop free-falling nuclear weapons, it was subsequently modified to perform a wide range of roles, such as the deployment of cruise missiles, maritime patrol (Tu-142), and even civilian airliner (Tu-114). An AWACS platform (Tu-126) was developed from the Tu-114. An icon of the Cold War, the Tu-95 has served, not only as a weapons platform, but as a symbol of Soviet and later Russian national prestige. Russia’s air force has received the first examples of a number of modernised strategic bombers Tu-95MSs following upgrade work. Enhancements have been confined to the bomber's electronic weapons and targeting systems. More details