John Moses Browning (January 23, 1855 – November 26, 1926) was an American firearms designer who developed many varieties of military and civilian firearms, cartridges, and gun mechanisms – many of which are still in use around the world. He made his first firearm at age 13 in his father’s gun shop, and was awarded the first of his 128 firearm patents on October 7, 1879, at the age of 24. He is regarded as one of the most successful firearms designers of the 19th and 20th centuries, and pioneered the development of modern automatic and semi-automatic firearms. 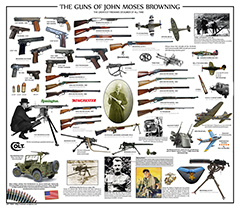 Browning influenced nearly all categories of firearms design. He invented, or made significant improvements to, single-shot, lever-action, and pump-action rifles and shotguns. Arguably, his most significant contributions were in the area of autoloading firearms. He developed the first reliable and compact autoloading pistols by inventing the telescoping bolt, then integrating the bolt and barrel shroud into what is known as the pistol slide. Browning’s telescoping bolt design is now found on nearly every modern semi-automatic pistol, as well as several modern fully automatic weapons. He also developed the first gas-operated firearm, the Colt–Browning Model 1895 machine gun – a system that surpassed mechanical recoil operation to become the standard for most high-power self-loading firearm designs worldwide. He also made significant contributions to automatic cannon development.

Browning’s most successful designs include the M1911 pistol, the water-cooled M1917, the air-cooled M1919, and heavy M2 machine guns, the Browning Automatic Rifle, and the Browning Auto-5 – the first semi-automatic shotgun. Some of these arms are still manufactured, often with only minor changes in detail and cosmetics to those assembled by Browning or his licensees. His guns are some of the most copied firearms in the world.

The M1895 Machine Gun saw action in the Spanish–American War with the United States Marine Corps. The Colt M1911, Browning 1917/19, and the BAR saw action with US forces in World War I, World War II, and the Korean War. The M1911 went on to serve as the U.S.’s standard military side arm until 1985; a variant is still used by special operations units of the United States Marine Corps and the design remains very popular amongst civilian shooters and some police departments. The Browning Hi-Power has had a similarly lengthy period of military service outside the United States and remains the standard side arm of the Australian and Canadian armed forces. The .50 caliber M2 Browning machine gun – the enduring “Ma Deuce” – was developed in 1918, entered service with the US Armed Forces in 1921, and has remained in active service for nearly a century with militaries across the world in a variety of roles. The 37mm M4 autocannon was initially designed by Browning in 1921 and entered service in 1938; it was used both in aircraft and on U.S. Navy PT boats during World War II. More details