The T-34, a Soviet medium tank, had a profound and lasting effect on the field of tank design. At its introduction in 1940, the T-34 possessed an unprecedented combination of firepower, mobility, protection and ruggedness. Its 76.2 mm (3 in) high-velocity tank gun provided a substantial increase in firepower over any of its contemporaries while its well-sloped armour was difficult to penetrate by most contemporary anti-tank weapons. When it was first encountered in 1941, German general Paul Ludwig Ewald von Kleist called it “the finest tank in the world” and Heinz Guderian affirmed the T-34’s “vast superiority” over existing German armour of the period. Although its armour and armament were surpassed later in the war, it has often been credited as the most effective, efficient and influential tank design of the Second World War. 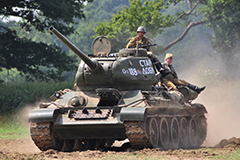 The T-34 was the mainstay of Soviet armoured forces throughout the Second World War. Its design allowed it to be continuously refined to meet the constantly evolving needs of the Eastern Front: as the war went on it became more capable, but also quicker and cheaper to produce. Soviet industry would eventually produce over 80,000 T-34s of all variants, allowing steadily greater numbers to be fielded as the war progressed despite the loss of tens of thousands in combat against the German Wehrmacht. Replacing many light and medium tanks in Red Army service, it was the most-produced tank of the war, as well as the second most produced tank of all time (after its successor, the T-54/55 series). At 44,900 losses during the war, it also suffered the most tank losses of all time. Its development led directly to the T-54 and T-55 series of tanks, which in turn evolved into the later T-62, T-72, and T-90 that form the armoured core of many modern armies. T-34 variants were widely exported after World War II, and even as recently as 2010, the tank has seen limited front-line service with several developing countries.

The T-34 had well-sloped armour, a relatively powerful engine and wide tracks. The initial T-34 version had a powerful 76.2 mm gun, and is often called the T-34/76 (originally a World War II German designation, never used by the Red Army). In 1944, a second major version began production, the T-34-85, with a larger 85 mm gun intended to deal with newer German tanks.

Comparisons can be drawn between the T-34 and the U.S. M4 Sherman tank. Both tanks were the backbone of the armoured units in their respective armies, both nations distributed these tanks to their allies, who also used them as the mainstay of their own armoured formations, and both were upgraded extensively and fitted with more powerful guns. Both were designed for mobility and ease of manufacture and maintenance, sacrificing some performance for these goals. Both chassis were used as the foundation for a variety of support vehicles, such as armour recovery vehicles, tank destroyers, and self-propelled artillery. Both were an approximately even match for the standard German medium tank, the Panzer IV, though each of these three tanks had particular advantages and weaknesses compared with the other two. Neither the T-34 nor the M4 was a match for Germany’s heavier tanks, the Panther (technically a medium tank) or the Tiger I; the Soviets used the IS-2 heavy tank and the U.S. used the M26 Pershing as the heavy tanks of their forces instead. More details