The IHNC Lake Borgne Surge Barrier also called the Great Wall of Louisiana is a storm surge barrier constructed near the confluence of and across the Gulf Intracoastal Waterway and the Mississippi River Gulf Outlet near New Orleans. The barrier runs generally north-south from a point just east of Michoud Canal on the north bank of the GIWW and just south of the existing Bayou Bienvenue flood control structure. 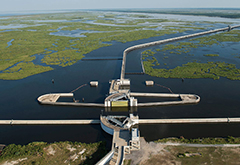 Navigation gates where the barrier crosses the GIWW and Bayou Bienvenue reduce the risk of storm surge coming from Lake Borgne and/or the Gulf of Mexico. Another navigation gate (Seabrook Floodgate) has been constructed in the Seabrook vicinity where the IHNC meets Lake Pontchartrain to block a storm surge from entering the IHNC from the Lake.

The Inner Harbor Navigation Canal (IHNC) surge barrier was authorized by Congress in 2006. The barrier is designed to reduce the risk of storm damage to some of the region's most vulnerable areas - New Orleans East, metro New Orleans, the 9th Ward, and St. Bernard Parish. This project aims to protect these areas from storm surge coming from the Gulf of Mexico and Lake Borgne.

The project was funded by the American Recovery and Reinvestment Act of 2009. In April 2008, the Corps awarded a construction contract to Shaw Environmental & Infrastructure for the Lake Borgne Surge Barrier, making this project the largest design-build civil works project in Corps history. It is highly unusual for a civil works project to be designed and constructed simultaneously. The expedited process was necessary, however, given the compressed time frame for achieving the 100-year level of risk reduction in 2011. More details