The first handheld cellular mobile phone was demonstrated by John F. Mitchell and Martin Cooper of Motorola in 1973, using a handset weighing 2 kilograms (4.4 lb). The first commercial automated cellular network was launched in Japan by Nippon Telegraph and Telephone in 1979. This was followed in 1981 by the simultaneous launch of the Nordic Mobile Telephone (NMT) system in Denmark, Finland, Norway, and Sweden. Several other countries then followed in the early to mid-1980s. These first-generation (1G) systems could support far more simultaneous calls but still used analog cellular technology. In 1983, the DynaTAC 8000x was the first commercially available handheld mobile phone.

In 1991, the second-generation (2G) digital cellular technology was launched in Finland by Radiolinja on the GSM standard. This sparked competition in the sector as the new operators challenged the incumbent 1G network operators. 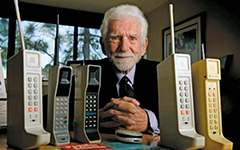 Ten years later, in 2001, the third generation (3G) was launched in Japan by NTT DoCoMo on the WCDMA standard. This was followed by 3.5G, 3G+ or turbo 3G enhancements based on the high-speed packet access (HSPA) family, allowing UMTS networks to have higher data transfer speeds and capacity.

By 2009, it had become clear that, at some point, 3G networks would be overwhelmed by the growth of bandwidth-intensive applications, such as streaming media. Consequently, the industry began looking to data-optimized fourth-generation technologies, with the promise of speed improvements up to ten-fold over existing 3G technologies. The first two commercially available technologies billed as 4G were the WiMAX standard, offered in North America by Sprint, and the LTE standard, first offered in Scandinavia by TeliaSonera. More details