The Peterborough Lift Lock is a boat lift located on the Trent Canal in the city of Peterborough, Ontario, Canada, and is Lock 21 on the Trent-Severn Waterway. For most of its life, the lock's dual lifts were the highest hydraulic boat lifts in the world, raising boats 65 ft (20 m). This was a considerable accomplishment in the first years of the 20th century, when conventional locks usually only had a 7 ft (2.1 m) rise. 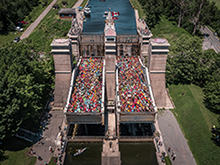 In the 1980s, a visitor centre was built beside the lock. It offers interactive simulations of going over the lift lock in a boat, and historical exhibits detailing the construction of the lift lock. Residents and visitors skate on the canal below the lift lock in the winter.

The Peterborough Lift Lock was designated a National Historic Site in 1979, and was named an Historic Mechanical Engineering Landmark by the American Society of Mechanical Engineers in 1987. The Trent-Severn has a similar hydraulic lift lock, the Kirkfield Lift Lock, at its summit near Kirkfield, with basins of the same dimensions, but which has a smaller vertical lift. More details