In 1953, while working at the Aeronautical Research Laboratories (ARL) of the Defence Science and Technology Organisation, in Melbourne, Australian research scientist David Warren conceived a device that would record not only the instrument readings, but also the voices in the cockpit. In 1954 he published a report entitled “A Device for Assisting Investigation into Aircraft Accidents”. 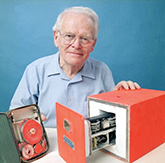 Warren built a prototype FDR called “The ARL Flight Memory Unit” in 1956, and in 1958 he built the first combined FDR/CVR prototype, which was designed with civilian aircraft in mind, for explicit post-crash examination purposes. Aviation authorities from around the world were largely uninterested at first, but this changed in 1958 when Sir Robert Hardingham, the Secretary of the British Air Registration Board, visited the ARL and was introduced to David Warren. Hardingham realised the significance of the invention and arranged for Warren to demonstrate the prototype in the UK.

The ARL assigned an engineering team to help Warren develop the prototype to airborne stage. The team, consisting of electronics engineers Lane Sear, Wally Boswell and Ken Fraser, developed a working design that incorporated a fire-resistant and shockproof case, a reliable system for encoding and recording aircraft instrument readings and voice on one wire, and a ground-based decoding device. The ARL system, made by the British firm of S. Davall & Sons Ltd, in Middlesex, was named the “Red Egg” because of its shape and bright red colour.

The units were redesigned in 1965 and relocated at the rear of aircraft to increase the probability of successful data retrieval after a crash. More details