The Seikan Tunnel is a 53.85 km (33.46 mi) dual gauge railway tunnel in Japan, with a 23.3 km (14.5 mi) long portion under the seabed. The track level is about 100 metres (330 ft) below the seabed and 240 m (790 ft) below sea level. It extends beneath the Tsugaru Strait — connecting Aomori Prefecture on the main Japanese island of Honshu with the northern island of Hokkaido — as part of the standard gauge Hokkaido Shinkansen and the narrow gauge Kaikyō Line portion of the Hokkaido Railway Company (JR Hokkaido)'s Tsugaru-Kaikyō Line. 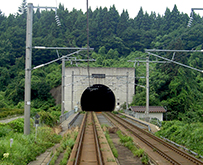 The tunnel was opened on 13 March 1988, having cost a total of ¥1.1 trillion (US$7 billion) to construct, almost 12 times the original budget, much of which was due to inflation over the years. Once the tunnel was completed, all railway transport between Honshu and Hokkaido used it. However, for passenger transport, 90% of people use air due to the speed and cost. For example, to travel between Tokyo and Sapporo by train takes more than nine hours, with several transfers. By air, the journey is three hours and thirty minutes, including airport access times. Deregulation and competition in Japanese domestic air travel has brought down prices on the Tokyo-Sapporo route, making rail more expensive in comparison.

The Seikan Tunnel is the world's longest tunnel with an undersea segment (The Channel tunnel, while shorter, has a longer undersea segment). It is also the second deepest and the second longest main-line railway tunnel after the Gotthard Base Tunnel in Switzerland opened in 2016. More details