A hydrogen vehicle is a vehicle that uses hydrogen as its onboard fuel for motive power. Hydrogen vehicles include hydrogen-fuelled space rockets, as well as automobiles and other transportation vehicles. The power plants of such vehicles convert the chemical energy of hydrogen to mechanical energy either by burning hydrogen in an internal combustion engine, or by reacting hydrogen with oxygen in a fuel cell to run electric motors. Widespread use of hydrogen for fuelling transportation is a key element of a proposed hydrogen economy. 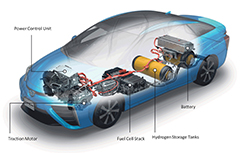 As of 2016, there are 3 hydrogen cars publicly available in select markets: the Toyota Mirai, the Hyundai ix35 FCEV, and the Honda Clarity. Several other companies are working to develop hydrogen cars. As of 2014, 95% of hydrogen is made from natural gas. It can be produced using renewable sources, but that is an expensive process.

Integrated wind-to-hydrogen (power-to-gas) plants, using electrolysis of water, are exploring technologies to deliver costs low enough, and quantities great enough, to compete with hydrogen production using natural gas. The drawbacks of hydrogen use are high carbon emissions intensity when produced from natural gas, capital cost burden, low energy content per unit volume, production and compression of hydrogen, and the large investment in infrastructure that would be required to fuel vehicles. More details