The Texas City Refinery explosion occurred on March 23, 2005, when a hydrocarbon vapor cloud was ignited and violently exploded at the ISOM isomerization process unit at BP's Texas City refinery in Texas City, Texas, killing 15 workers, injuring more than 180 others and severely damaging the refinery. The Texas City Refinery was the second-largest oil refinery in the state, and the third-largest in the United States with an input capacity of 437,000 barrels (69,500 m3) per day as of January 1, 2000. BP acquired the Texas county refinery as part of its merger with Amoco in 1999. 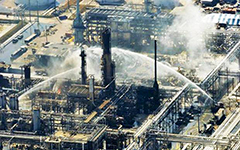 BP's own accident investigation report stated that the direct cause of the accident was "heavier–than-air hydrocarbon vapors combusting after coming into contact with an ignition source, probably a running vehicle engine. The hydrocarbons originated from liquid overflow from the F-20 blowdown stack following the operation of the raffinate splitter overpressure protection system caused by overfilling and overheating of the tower contents." Both the BP and the U.S. Chemical Safety and Hazard Investigation Board reports identified numerous technical and organisational failings at the refinery and within corporate BP.

In 2011 BP announced that it was selling the refinery as part of its ongoing divestment plan to pay for ongoing compensation claims and remedial activities following the Deepwater Horizon disaster in 2010. The sale of the refinery was successfully completed at the start of 2013 to Marathon Petroleum Corporation for US$2.5 billion. More details

The Longest Tunnel in The World