The Erie Canal is a canal in New York, United States that is part of the east–west, cross-state route of the New York State Canal System (formerly known as the New York State Barge Canal). Originally, it ran 363 miles (584 km) from where Albany meets the Hudson River to where Buffalo meets Lake Erie. It was built to create a navigable water route from New York City and the Atlantic Ocean to the Great Lakes. When completed in 1825, it was the second longest canal in the world (after the Grand Canal in China) and greatly affected the development and economy of New York, New York City, and the United States.

The canal was first proposed in the 1780s, then re-proposed in 1807. A survey was authorized, funded, and executed in 1808. Proponents of the project gradually wore down opponents; its construction began in 1817. The canal has 34 numbered locks starting with Black Rock Lock and ending downstream with the Troy Federal Lock. Both are owned by the federal government. It has an elevation difference of about 565 feet (172 m). It opened on October 26, 1825.

In a time when bulk goods were limited to pack animals (a 250-pound (113 kg) maximum), and there were no railways, water was the most cost-effective way to ship bulk goods.

The canal was denigrated by its political opponents as "Clinton's Folly" or "Clinton's Big Ditch". It was the first transportation system between the Eastern Seaboard and the western interior of the United States that did not require portage. 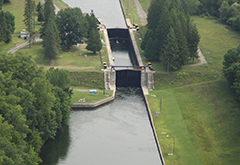 It was faster than carts pulled by draft animals and cut transport costs by about 95%. The canal gave New York City's port an incomparable advantage over all other U.S. port cities and ushered in the state's 19th century political and cultural ascendancy. The canal fostered a population surge in western New York and opened regions farther west to settlement. It was enlarged between 1834 and 1862. The canal's peak year was 1855, when 33,000 commercial shipments took place. In 1918, the western part of the canal was enlarged to become part of the New York State Barge Canal, which also extended to the Hudson River running parallel to the eastern half of the Erie Canal.

In 2000, the United States Congress designated the Erie Canalway National Heritage Corridor to recognize the national significance of the canal system as the most successful and influential human-built waterway and one of the most important works of civil engineering and construction in North America. The canal has been mainly used by recreational watercraft since the retirement of the last large commercial ship, Day Peckinpaugh, in 1994. The canal saw a recovery in commercial traffic in 2008. More details