MOSE (MOdulo Sperimentale Elettromeccanico, Experimental Electromechanical Module) is a project intended to protect the city of Venice, Italy and the Venetian Lagoon from flooding.

The MOSE project is an integrated system consisting of rows of mobile gates installed at the Lido, Malamocco, and Chioggia inlets that are able to isolate the Venetian Lagoon temporarily from the Adriatic Sea during acqua alta high tides. Together with other measures, such as coastal reinforcement, the raising of quaysides, and the paving and improvement of the lagoon. 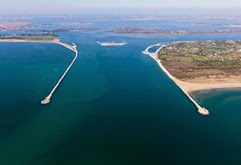 The aim of MOSE Project is to protect the lagoon, its towns, villages and inhabitants along with its iconic historic, artistic and environmental heritage from floods, including extreme events. Although the tide in the lagoon basin is lower than in other areas of the world (where it may reach as high as 20 metres (66 ft)), the phenomenon may become significant when associated with atmospheric and meteorological factors such as low pressure and the bora, a north-easterly wind coming from Trieste, or the Sirocco, a hot south-easterly wind. Those conditions push waves into the gulf of Venice. High water is also worsened by rain and water flowing into the lagoon from the drainage basin at 36 inflow points associated with small rivers and canals.

The Consorzio Venezia Nuova is responsible for the work on behalf of the Ministry of Infrastructure and Transport – Venice Water Authority. Construction began simultaneously in 2003 at all three lagoon inlets, and as of June 2013, more than 85% of the project has been completed. It is expected to be fully completed in 2022. More details

The Great Wall of Louisiana