The Bank of America Tower (BOAT) at One Bryant Park is a 1,200 ft (365.8 m) skyscraper in the Midtown area of Manhattan in New York City. It is located on Avenue of the Americas, between 42nd and 43rd Streets, opposite Bryant Park. The US$1 billion project was designed by COOKFOX Architects, and advertised to be one of the most efficient and ecologically friendly buildings in the world. It is the fourth tallest building in New York City, after One World Trade Center, 432 Park Avenue, and the Empire State Building, and the sixth tallest building in the United States. Construction was completed in 2009.

The building's Urban Garden Room at 43rd Street and 6th Avenue is open to the public. 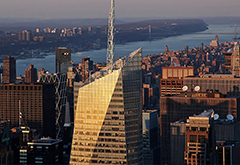 Several buildings were demolished to make way for the tower. Among them was the Hotel Diplomat, a 13-story structure which had occupied the site at 108 West 43rd Street since 1911, and Henry Miller's Theatre, which was rebuilt and reopened at its previous location. The building's tenants include Bank of America as the anchor tenant and Marathon Asset Management, and the tower's platinum LEED rating and modern column-free office space has enticed tenants from all over the city. The Bank of America Tower is considered a worldwide model for green architecture in skyscrapers. More details