On the morning of April 5, 1987, during a high spring flood, the Schoharie Creek Bridge collapsed. A snowmelt combined with rainfall totaling 150 mm (5.9 in) produced an estimated 50-year flood on the creek. 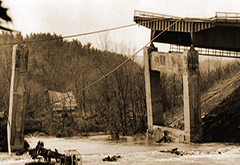 Pier three was the first to collapse, which caused the progressive collapse of spans three and four. Ninety minutes later pier two and span two collapsed. Two hours later pier one and span one shifted. A National Transportation Safety Board investigation suggested that pier two collapsed because the wreckage of pier three and the two spans may have partially blocked the river, redirecting and increasing the velocity of the flow of water to pier two.

Six days later, 5 km (3.1 mi) upstream, a large section of the Mill Point Bridge collapsed. The bridge had been closed since the flood as a precaution, since inspection showed that its foundations had also been eroded.

The failure of the Schoharie Creek Bridge motivated improvement in bridge design and inspection procedures within New York and beyond. More details