Konrad Zuse (22 June 1910 — 18 December 1995) was a German civil engineer, inventor and computer pioneer. He created the  first really functional computer Z1 in his parents’ living room in 1936 to 1938, and it is considered to be the first electro-mechanical binary programmable (modern) computer. 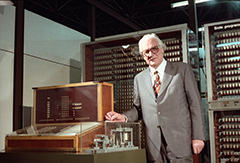 His greatest achievement was the world’s first functional program-controlled Turing-complete computer, the Z3, which became operational in May 1941. Thanks to this machine and its predecessors, Zuse is often regarded as the inventor of the computer.

The Z3 was built with 2000 relays, implementing a 22 bit word length that operated at a clock frequency of about 5–10 Hz. Program code was supplied on punched film while data could be stored in 64 words of memory or supplied from the keyboard. It was quite similar to modern machines in some respects, pioneering numerous advances such as floating point numbers. Rather than the harder-to-implement decimal system (used in Charles Babbage’s earlier design), using a binary system meant that Zuse’s machines were easier to build and potentially more reliable, given the technologies available at that time. The Z3 was Turing complete. More details