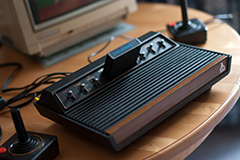 Baer’s family had fled Germany just before World War II and Baer served the American war effort, following which he gained an interest in electronics. Through several jobs in the electronics industry, he was working as an engineer at Sanders Associates when he conceived of the idea of playing games on a television screen around 1966. With support of his employers, he worked through several prototypes until he arrived at a “Brown Box” that became the blueprint for the first home video game console, the Magnavox Odyssey. Baer continued to design several other consoles and computer game units, including contributing to design of the Simon electronic game. Baer continued to work in electronics until his death in 2014, with over 150 patents to his name.

Baer is considered “the Father of Video Games” due to his many contributions to games and the video game industry in the latter half of the 20th century. In February, 2006, he was awarded the National Medal of Technology for “his groundbreaking and pioneering creation, development and commercialization of interactive video games, which spawned related uses, applications, and mega-industries in both the entertainment and education realms”. More details