A compressed air car is a compressed air vehicle that uses a motor powered by compressed air. The car can be powered solely by air, or combined (as in a hybrid electric vehicle) with gasoline, diesel, ethanol, or an electric plant with regenerative braking. 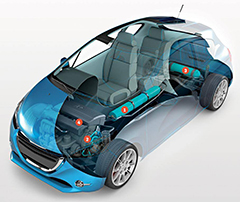 There have been prototype cars since the 1920s, with compressed air used in torpedo propulsion.

In contrast to hydrogen's issues of damage and danger involved in high-impact crashes, air, on its own, is non-flammable, it was reported on Seven Network's Beyond Tomorrow that on its own carbon-fiber is brittle and can split under sufficient stress, but creates no shrapnel when it does so. Carbon-fiber tanks safely hold air at a pressure somewhere around 31 MPa, making them comparable to steel tanks. The cars are designed to be filled up at a high-pressure pump. 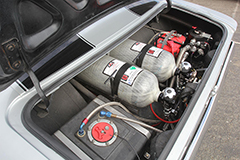 In compressed air vehicles tank designs tend to be isothermal; a heat exchanger of some kind is used to maintain the temperature (and pressure) of the tank as the air is extracted.

Compressed air has relatively low energy density. Air at 30 MPa (4,500 psi) contains about 50 Wh of energy per liter (and normally weighs 372 g per liter).[citation needed] For comparison, a lead–acid battery contains 60-75 Wh/l. A lithium-ion battery contains about 250-620 Wh/l. The EPA estimates the energy density of gasoline at 8,890 Wh/l; however, a typical gasoline engine with 18% efficiency can only recover the equivalent of 1694 Wh/l. The energy density of a compressed air system can be more than doubled if the air is heated prior to expansion.

In order to increase energy density, some systems may use gases that can be liquified or solidified. "CO2 offers far greater compressibility than air when it transitions from gaseous to supercritical form". More details