The Space Shuttle was a partially reusable low Earth orbital spacecraft system that was operated from 1981 to 2011 by the U.S. National Aeronautics and Space Administration (NASA) as part of the Space Shuttle program. Its official program name was Space Transportation System (STS), taken from a 1969 plan for a system of reusable spacecraft of which it was the only item funded for development. The first of four orbital test flights occurred in 1981, leading to operational flights beginning in 1982. In addition to the prototype whose completion was cancelled, five complete Shuttle systems were built and used on a total of 135 missions from 1981 to 2011, launched from the Kennedy Space Center (KSC) in Florida. Operational missions launched numerous satellites, interplanetary probes, and the Hubble Space Telescope (HST); conducted science experiments in orbit; and participated in construction and servicing of the International Space Station. The Shuttle fleet’s total mission time was 1322 days, 19 hours, 21 minutes and 23 seconds. 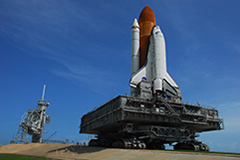 Shuttle components include the Orbiter Vehicle (OV) with three clustered Rocketdyne RS-25 main engines, a pair of recoverable solid rocket boosters (SRBs), and the expendable external tank (ET) containing liquid hydrogen and liquid oxygen. The Space Shuttle was launched vertically, like a conventional rocket, with the two SRBs operating in parallel with the OV’s three main engines, which were fueled from the ET. The SRBs were jettisoned before the vehicle reached orbit, and the ET was jettisoned just before orbit insertion, which used the orbiter’s two Orbital Maneuvering System (OMS) engines. At the conclusion of the mission, the orbiter fired its OMS to deorbit and reenter the atmosphere. The orbiter then glided as a spaceplane to a runway landing, usually to the Shuttle Landing Facility at Kennedy Space Center, Florida or Rogers Dry Lake in Edwards Air Force Base, California. After landing at Edwards, the orbiter was flown back to the KSC on the Shuttle Carrier Aircraft, a specially modified Boeing 747.

The first orbiter, Enterprise, was built in 1976, used in Approach and Landing Tests and has no orbital capability. Four fully operational orbiters were initially built: Columbia, Challenger, Discovery, and Atlantis. Of these, two were lost in mission accidents: Challenger in 1986 and Columbia in 2003, with a total of fourteen astronauts killed. A fifth operational (and sixth in total) orbiter, Endeavour, was built in 1991 to replace Challenger. The Space Shuttle was retired from service upon the conclusion of Atlantis’s final flight on July 21, 2011. The U.S. has since relied on the Russian Soyuz spacecraft to transport astronauts to the International Space Station, pending the Commercial Crew Development and Space Launch System programs on schedule for first flights in 2019 and 2020. More details