Panavia Tornado was developed and built by Panavia Aircraft GmbH, a tri-national consortium consisting of British Aerospace (previously British Aircraft Corporation), MBB of West Germany, and Aeritalia of Italy. It first flew on 14 August 1974 and was introduced into service in 1979–1980. Due to its multirole design, it was able to replace several different fleets of aircraft in the adopting air forces. The Royal Saudi Air Force (RSAF) became the only export operator of the Tornado in addition to the three original partner nations. A tri-nation training and evaluation unit operating from RAF Cottesmore, the Tri-National Tornado Training Establishment, maintained a level of international co-operation beyond the production stage. 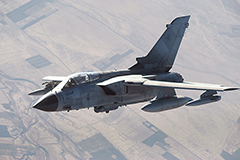 The Tornado was used by the Royal Air Force (RAF), Italian Air Force and RSAF during the 1991 Gulf War, in which the Tornado conducted many low-altitude penetrating strike missions. The Tornados of various operators were also used in conflicts in the former Yugoslavia during the Bosnian War and Kosovo War, the Iraq War, Libya during the Libyan civil war, as well as smaller roles in Afghanistan, Yemen, and Syria. Including all variants, 992 aircraft were built.

In order for the Tornado to perform well as a low-level supersonic strike aircraft, it was considered necessary for it to possess good high-speed and low-speed flight characteristics. To achieve high-speed performance, a swept or delta wing is typically adopted, but these wing designs are inefficient at low speeds. To operate at both high and low speeds with great effectiveness, the Tornado uses a variable-sweep wing. This approach had been adopted by earlier aircraft, such as the American General Dynamics F-111 Aardvark strike fighter, and the Soviet Mikoyan-Gurevich MiG-23 fighter. The F-111 has many similarities with the smaller Tornado; however, the Tornado differs in being a multi-role aircraft with more advanced onboard systems and avionics. More details