The Mikoyan-Gurevich MiG-25 (Foxbat) is a supersonic interceptor and reconnaissance aircraft that was among the fastest military aircraft to enter service. It was designed by the Soviet Union's Mikoyan-Gurevich bureau, and is one of the few combat aircraft built primarily using stainless steel. It was the last plane designed by Mikhail Gurevich before his retirement.

The first prototype flew in 1964, and the aircraft entered service in 1970. It has an operational top speed of Mach 2.83 (Mach 3.2 is possible but at risk of significant damage to the engines), and features a powerful radar and four air-to-air missiles. When first seen in reconnaissance photography, the large wing suggested an enormous and highly maneuverable fighter, at a time when U.S. design theories were also evolving towards higher maneuverability due to combat performance in the Vietnam War. The appearance of the MiG-25 sparked serious concern in the West and prompted dramatic increases in performance for the McDonnell Douglas F-15 Eagle then under development in the late 1960s. The capabilities of the MiG-25 were better understood in 1976 when Soviet pilot Viktor Belenko defected in a MiG-25 to the United States via Japan. It turned out that the aircraft's weight necessitated its large wings. 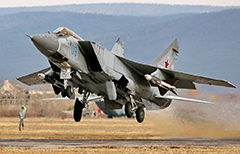 Production of the MiG-25 series ended in 1984 after completion of 1,190 aircraft. A symbol of the Cold War, the MiG-25 flew with Soviet allies and former Soviet republics, remaining in limited service in several export customers. It is one of the highest-flying military aircraft, fastest serial produced interceptor aircraft and the second fastest serial produced aircraft after the SR-71 reconnaissance aircraft that was built in very small series compared to the MiG-25. As of 2018, the MiG-25 remains the fastest manned serial produced aircraft in operational use, and the fastest plane that was offered for supersonic flights and edge of space flights to civilian customers. More details

The Mikoyan MiG-31 is a supersonic interceptor aircraft developed for use by the Soviet Air Forces. The aircraft was designed by the Mikoyan design bureau as a replacement for the earlier MiG-25 “Foxbat”; the MiG-31 is based on, and shares design elements with the MiG-25. The MiG-31 has the distinction of being one of the fastest combat jets in the world. It continues to be operated by the Russian Air Force and the Kazakhstan Air Force following the end of the Cold War and the collapse of the Soviet Union in 1991. The Russian Defence Ministry expects the MiG-31 to remain in service until at least 2030. More details