The 1883 eruption of Krakatoa in the Dutch East Indonesia began in the afternoon of Sunday, 26 August 1883, and peaked in the late morning of Monday, 27 August when over 70% of the island and its surrounding archipelago were destroyed as it collapsed into a caldera. Additional seismic activity was reported to have continued until February 1884, though reports of seismic activity after October 1883 were later dismissed by Rogier Verbeek's investigation into the eruption. 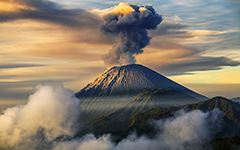 The 1883 eruption was one of the deadliest and most destructive volcanic events in recorded history. At least 36,417 deaths are attributed to the eruption and the tsunamis it created. Significant additional effects were also felt around the world in the days and weeks after the volcano's eruption.

The combination of pyroclastic flows, volcanic ash, and tsunamis associated with the Krakatoa eruptions had disastrous regional consequences. Some land in Banten, approximately 90 km south, was never repopulated; it reverted to jungle and is now the Ujung Kulon National Park. The official death toll recorded by the Dutch authorities was 36,417.

Around noon on 27 August 1883, a rain of hot ash fell around Ketimbang in Sumatra. Approximately 1,000 people were killed in Sumatra; there were no survivors from the 3,000 people located on the island of Sebesi. There are numerous documented reports of groups of human skeletons floating across the Indian Ocean on rafts of volcanic pumice and washing up on the east coast of Africa, up to a year after the eruption.

Ships as far away as South Africa rocked as tsunamis hit them, and the bodies of victims were found floating in the ocean for months after the event. The tsunamis which accompanied the eruption were believed to have been caused by gigantic pyroclastic flows entering the sea; each of the four great explosions was accompanied by massive pyroclastic flows resulting from the gravitational collapse of the eruption columns. This caused several cubic kilometers of material to enter the sea, displacing an equally huge volume of seawater. The town of Merak was destroyed by a tsunami 46 m (151 ft) high. Some of the pyroclastic flows reached the Sumatran coast as much as 40 km (25 mi) away, having apparently moved across the water on a cushion of superheated steam There are also indications of submarine pyroclastic flows reaching 15 km (9.3 mi) from the volcano.

Smaller waves were recorded on tidal gauges as far away as the English Channel. These occurred too soon to be remnants of the initial tsunamis and may have been caused by concussive air waves from the eruption. These air waves circled the globe several times and were still detectable on barographs five days later. More details