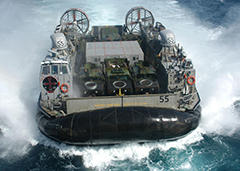 Cockerell came across the key concept in his design when studying the ring of airflow when high-pressure air was blown into the annular area between two concentric tin cans, one coffee and the other from cat food and a hair dryer. This produced a ring of airflow, as expected, but he noticed an unexpected benefit as well; the sheet of fast moving air presented a sort of physical barrier to the air on either side of it. This effect, which he called the “momentum curtain”, could be used to trap high-pressure air in the area inside the curtain, producing a high-pressure plenum that earlier examples had to build up with considerably more airflow. In theory, only a small amount of active airflow would be needed to create lift and much less than a design that relied only on the momentum of the air to provide lift, like a helicopter. In terms of power, a hovercraft would only need between one quarter to one half of the power required by a helicopter.

Cockerell built several models of his hovercraft design in the early 1950s, featuring an engine mounted to blow from the front of the craft into a space below it, combining both lift and propulsion. He demonstrated the model flying over many Whitehall carpets in front of various government experts and ministers, and the design was subsequently put on the secret list. In spite of tireless efforts to arrange funding, no branch of the military was interested, as he later joked, “the navy said it was a plane not a boat; the air force said it was a boat not a plane; and the army was ‘plain not interested”. More details