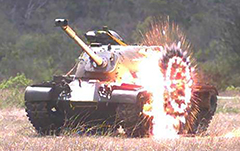 ATGMs range in size from shoulder-launched weapons, which can be transported by a single soldier, to larger tripod-mounted weapons, which require a squad or team to transport and fire, to vehicle and aircraft mounted missile systems.

The introduction to the modern battlefield of smaller, man-portable ATGMs with larger warheads has given infantry the ability to defeat light and medium tanks at great ranges, though main battle tanks (MBTs) using composite and reactive armors have proven to be resistant to smaller ATGMs. Earlier infantry anti-tank weapons, such as anti-tank rifles, anti-tank rockets and magnetic anti-tank mines, had limited armor-penetration abilities or required a soldier to approach the target closely. As of 2016, ATGMs were used by over 130 countries and many non-state actors around the world. More details