The 1940 Tacoma Narrows Bridge, the first Tacoma Narrows Bridge, was a suspension bridge in the U.S. state of Washington that spanned the Tacoma Narrows strait of Puget Sound between Tacoma and the Kitsap Peninsula. It opened to traffic on July 1, 1940, and dramatically collapsed into Puget Sound on November 7 of the same year. At the time of its construction (and its destruction), the bridge was the third-longest suspension bridge in the world in terms of main span length, behind the Golden Gate Bridge and the George Washington Bridge.

Construction on the bridge began in September 1938. From the time the deck was built, it began to move vertically in windy conditions, which led to construction workers giving the bridge the nickname Galloping Gertie. The motion was observed even when the bridge opened to the public. Several measures aimed at stopping the motion were ineffective, and the bridge's main span finally collapsed under 40-mile-per-hour (64 km/h) wind conditions the morning of November 7, 1940. 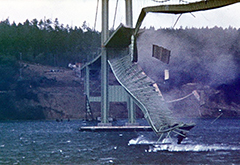 The bridge's collapse had a lasting effect on science and engineering. In many physics textbooks, the event is presented as an example of elementary forced resonance; the bridge collapsed because normal speed winds produced aeroelastic flutter that matched the bridge's natural frequency. The collapse boosted research into bridge aerodynamics-aeroelastics, which has influenced the designs of all later long-span bridges. More details