Wave power is the capture of energy of wind waves to do useful work – for example, electricity generation, water desalination, or pumping water. A machine that exploits wave power is a wave energy converter (WEC). 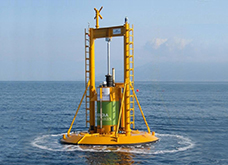 Wave power is distinct from tidal power, which captures the energy of the current caused by the gravitational pull of the Sun and Moon. Waves and tides are also distinct from ocean currents which are caused by other forces including breaking waves, wind, the Coriolis effect, cabbeling, and differences in temperature and salinity.

Wave-power generation is not a widely employed commercial technology, although there have been attempts to use it since at least 1890.

In 2000 the worlds first commercial Wave Power Device, the Islay LIMPET was installed on the coast of Islay in Scotland and connected to the National Grid. In 2008, the first experimental multi-generator wave farm was opened in Portugal at the Aguçadoura Wave Park.

There are currently hundreds of methods for converting wave power into energy already in use across the globe, and many more theories for recovering wave energy are in the early stages of research. The Bureau of Ocean Energy Management identifies four main wave energy technologies in use today: terminator devices, attenuators, point absorbers and overtopping devices. More details