In 1907, James Murray Spangler, a janitor from Canton, Ohio, invented the first practical, portable vacuum cleaner. Unable to produce the design himself due to lack of funding, he sold the patent in 1908 to William Henry Hoover who had Spangler’s machine redesigned with a steel casing, casters, and attachments. More details 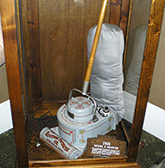 James Murray Spangler (November 20, 1848 – January 22, 1915) was an American inventor, salesman and janitor who invented the first commercially successful portable electric vacuum cleaner that revolutionized household carpet cleaning. His device was not the first vacuum cleaner. However, Spangler’s device was the first that was practical for home use. It was the first to use both a cloth filter bag and cleaning attachments. Spangler improved this basic model and received a patent for it in 1908. He formed the Electric Suction Sweeper Company to manufacture his device. William H. Hoover was so impressed with the vacuum cleaner that he bought into Spangler’s business and patents. More details

Hoover is a vacuum cleaner company founded in Ohio in the US. It also established a major base in the United Kingdom and mostly in the 20th century it dominated the electric vacuum cleaner industry, to the point where the Hoover brand name became synonymous with vacuum cleaners and vacuuming in the United Kingdom and Ireland. Hoover was part of the Whirlpool Corporation but was sold in 2006 to Techtronic Industries for $107 million. Hoover Europe/UK split from Hoover US in 1993 and was acquired by Techtronic Industries, a company based in Hong Kong. More details