Tsing Ma Bridge is a bridge in Hong Kong. It is the world's 11th-longest span suspension bridge, and was the second longest at time of completion. The bridge was named after the two islands it connects, namely Tsing Yi and Ma Wan. It has two decks and carries both road and rail traffic, which also makes it the largest suspension bridge of this type. The bridge has a main span of 1,377 metres (4,518 ft) and a height of 206 metres (676 ft). The span is the longest of all bridges in the world carrying rail traffic. 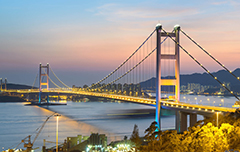 The bridge was designed by Mott MacDonald. The firm designed an early iteration of the bridge in 1982, with a two lane dual carriageway on the top deck, and a light railway on the lower deck. The bridge was redesigned beginning in 1989 to account for the three lane dual highway and the heavier airport railway. The designers were inspired by the Forth Bridge in Scotland and the Severn Bridge in England. More details