The Troll A platform is a condeep offshore natural gas platform in the Troll gas field off the west coast of Norway. It is the tallest and heaviest structure that has ever been moved to another position, relative to the surface of the Earth, and is among the largest and most complex engineering projects in history. The platform was a televised sensation when it was towed into the North Sea in 1996, where it is now operated by Statoil.

The Troll A platform has an overall height of 472 metres (1,549 ft), weighs 683,600 tons (1.2 million tons with ballast) and has the distinction of being the tallest and heaviest structure ever moved by mankind. The platform stands on the sea floor 303 metres (994 feet) below the surface of the sea and one of the continuous-slip-formed concrete cylindrical legs (the leg containing the import and export risers) has an elevator that takes over nine minutes to travel from the platform above the waves to the sea floor. 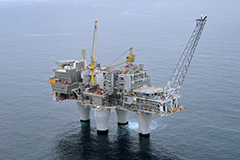 The walls of Troll A's legs are over 1 metre thick made of steel reinforced concrete formed in one continuous pour (slip forming) and each is a mathematically joined composite of several conical cylinders that flares out smoothly to greater diameters at both the top and bottom, so each support is somewhat wasp-waisted viewed in profile and circular in any cross-section (see picture at right). The concrete legs must be able to withstand intense pressure so are built using a continuous flow of concrete, a lengthy process that takes 20 minutes per 5 cm laid.

The four legs are joined by a "chord shortener", a reinforced concrete box interconnecting the legs, but which has the designed function of damping out unwanted potentially destructive wave-leg resonances by retuning the leg natural frequencies. (Not present in the picture at right.) Each leg is also sub-divided along its length into compartments a third of the way from each end which act as independent water-tight compartments. The legs use groups of six 40 metres (130 ft) tall vacuum-anchors holding it fixed in the mud of the sea floor. More details