Tidal power or tidal energy is a form of hydropower that converts the energy obtained from tides into useful forms of power, mainly electricity. Tidal power can be classified into four generating methods:

Tidal stream generators make use of the kinetic energy of moving water to power turbines, in a similar way to wind turbines that use wind to power turbines. Some tidal generators can be built into the structures of existing bridges or are entirely submersed, thus avoiding concerns over impact on the natural landscape. Land constrictions such as straits or inlets can create high velocities at specific sites, which can be captured with the use of turbines. These turbines can be horizontal, vertical, open, or ducted. Stream energy can be used at a much higher rate than wind turbines due to water being more dense than air. Using similar technology to wind turbines converting energy in tidal energy is much more efficient. Close to 10 mph (about 8.6 knots in nautical terms) ocean tidal current would have an energy output equal or greater than a 90 mph wind speed for the same size of turbine system. 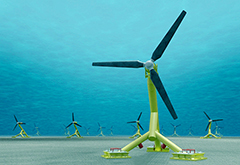 Tidal barrages make use of the potential energy in the difference in height (or hydraulic head) between high and low tides. When using tidal barrages to generate power, the potential energy from a tide is seized through strategic placement of specialized dams. When the sea level rises and the tide begins to come in, the temporary increase in tidal power is channeled into a large basin behind the dam, holding a large amount of potential energy. With the receding tide, this energy is then converted into mechanical energy as the water is released through large turbines that create electrical power through the use of generators. Barrages are essentially dams across the full width of a tidal estuary.

Dynamic tidal power (or DTP) is an untried but promising technology that would exploit an interaction between potential and kinetic energies in tidal flows. It proposes that very long dams (for example: 30–50 km length) be built from coasts straight out into the sea or ocean, without enclosing an area. Tidal phase differences are introduced across the dam, leading to a significant water-level differential in shallow coastal seas – featuring strong coast-parallel oscillating tidal currents such as found in the UK, China, and Korea.

Tidal lagoon is to construct circular retaining walls embedded with turbines that can capture the potential energy of tides. The created reservoirs are similar to those of tidal barrages, except that the location is artificial and does not contain a pre-existing ecosystem. The lagoons can also be in double (or triple) format without pumping or with pumping that will flatten out the power output. The pumping power could be provided by excess to grid demand renewable energy from for example wind turbines or solar photovoltaic arrays. Excess renewable energy rather than being curtailed could be used and stored for a later period of time. Geographically dispersed tidal lagoons with a time delay between peak production would also flatten out peak production providing near base load production though at a higher cost than some other alternatives such as district heating renewable energy storage. The cancelled Tidal Lagoon Swansea Bay in Wales, United Kingdom would have been the first tidal power station of this type once built. More details