The Thompson Submachine Gun was developed by General John T. Thompson, who originally envisioned an "auto rifle" (semi-automatic rifle) to replace the bolt action service rifles then in use. While searching for a way to allow such a weapon to operate safely without the complexity of a recoil or gas operated mechanism, Thompson came across a patent issued to John Bell Blish in 1915 based on adhesion of inclined metal surfaces under pressure. Thompson found a financial backer, Thomas F. Ryan, and started the Auto-Ordnance Company in 1916 for the purpose of developing his "auto rifle". It was primarily developed in Cleveland, Ohio. 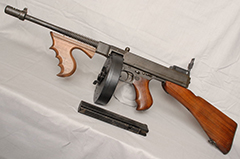 The principal designers were Theodore H. Eickhoff, Oscar V. Payne, and George E. Goll. By late 1917, the limits of the Blish Principle were discovered: rather than working as a locked breech, it functioned as a friction-delayed blowback action. It was found that the only cartridge currently in U.S. service suitable for use with the lock was the .45 ACP round. Thompson then envisioned a "one-man, hand-held machine gun" in .45 ACP as a "trench broom" for use in the ongoing trench warfare of World War I. Payne designed the gun itself and its stick and drum magazines. The project was then titled "Annihilator I" and by 1918, most of the design issues had been resolved. However, the war ended two days before prototypes could be shipped to Europe.

At an Auto-Ordnance board meeting in 1919 to discuss the marketing of the "Annihilator", with the war now over, the weapon was officially renamed the "Thompson Submachine Gun". While other weapons had been developed shortly prior with similar objectives in mind, the Thompson was the first weapon to be labeled and marketed as a "submachine gun". Thompson intended the weapon as an automatic "trench-broom" to sweep enemy troops from the trenches, filling a role for which the Browning Automatic Rifle (BAR) had been proven ill-suited. This concept had already been developed by German troops using their own Bergmann MP 18, the world's first submachine gun, in concert with Sturmtruppen tactics. More details