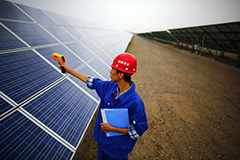 Each module is rated by its DC output power under standard test conditions (STC), and typically ranges from 100 to 365 Watts (W). The efficiency of a module determines the area of a module given the same rated output – an 8% efficient 230 W module will have twice the area of a 16% efficient 230 W module. There are a few commercially available solar modules that exceed efficiency of 24%.

A single solar module can produce only a limited amount of power; most installations contain multiple modules. A photovoltaic system typically includes an array of photovoltaic modules, an inverter, a battery pack for storage, interconnection wiring, and optionally a solar tracking mechanism.

The most common application of solar panels is solar water heating systems.

The price of solar power has continued to fall so that in many countries it is cheaper than ordinary fossil fuel electricity from the electricity grid, a phenomenon known as grid parity. More details