A nuclear submarine is a submarine powered by a nuclear reactor. The performance advantages of nuclear submarines over “conventional” (typically diesel-electric) submarines are considerable. Nuclear propulsion, being completely independent of air, frees the submarine from the need to surface frequently, as is necessary for conventional submarines. The large amount of power generated by a nuclear reactor allows nuclear submarines to operate at high speed for long periods of time; and the long interval between refuelings grants a range virtually unlimited, making the only limits on voyage times being imposed by such factors as the need to restock food or other consumables. 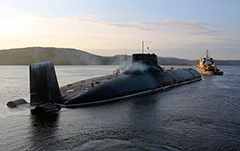 Current generations of nuclear submarines never need to be refueled throughout their 25-year lifespans. Conversely, the limited power stored in electric batteries means that even the most advanced conventional submarine can only remain submerged for a few days at slow speed, and only a few hours at top speed, though recent advances in air-independent propulsion have somewhat ameliorated this disadvantage. The high cost of nuclear technology means that relatively few states have fielded nuclear submarines. Some of the most serious nuclear and radiation accidents ever to occur have involved Soviet nuclear submarine mishaps.

Construction of the world’s first nuclear powered submarine was made possible by the successful development of a nuclear propulsion plant by a group of scientists and engineers at the Naval Reactors Branch of the Bureau of Ships and the Atomic Energy Commission. In July 1951 the U.S. Congress authorized construction of the first nuclear-powered submarine, Nautilus, under the leadership of Captain Hyman G. Rickover, USN (sharing names with Captain Nemo’s fictional submarine Nautilus in Jules Verne’s Twenty Thousand Leagues Under the Sea, and another USS Nautilus (SS-168) that served with distinction in World War II).

The Westinghouse Corporation was assigned to build its reactor. After the submarine was completed at the Electric Boat Company, First Lady Mamie Eisenhower broke the traditional bottle of champagne on Nautilus’ bow, and she was commissioned USS Nautilus (SSN-571), on 30 September 1954. On 17 January 1955, she departed Groton, Connecticut to begin sea trials. The submarine was 320 feet (98 m) long, and cost about $55 million.

The Soviet Union soon followed the United States in developing nuclear-powered submarines in the 1950s. Stimulated by the U.S. development of Nautilus, Soviet work on nuclear propulsion reactors began in the early 1950s at the Institute of Physics and Power Engineering, in Obninsk, under Anatoliy P. Alexandrov, later to become head of the Kurchatov Institute. In 1956, the first Soviet propulsion reactor designed by his team began operational testing. Meanwhile, a design team under Vladimir N. Peregudov worked on the vessel that would house the reactor.

After overcoming many obstacles, including steam generation problems, radiation leaks, and other difficulties, the first nuclear submarine based on these combined efforts, K-3 Leninskiy Komsomol of the Project 627 Kit class, called a November-class submarine by NATO, entered service in the Soviet Navy in 1958. More details