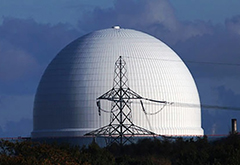 Nuclear plants are usually considered to be base load stations since fuel is a small part of the cost of production and because they cannot be easily or quickly dispatched. Their operations and maintenance (O&M) and fuel costs are, along with hydropower stations, at the low end of the spectrum and make them suitable as base-load power suppliers. The cost of spent fuel management, however, is somewhat uncertain.

The conversion to electrical energy takes place indirectly, as in conventional thermal power stations. The fission in a nuclear reactor heats the reactor coolant. The coolant may be water or gas or even liquid metal depending on the type of reactor. The reactor coolant then goes to a steam generator and heats water to produce steam. The pressurized steam is then usually fed to a multi-stage steam turbine. After the steam turbine has expanded and partially condensed the steam, the remaining vapour is condensed in a condenser. The condenser is a heat exchanger which is connected to a secondary side such as a river or a cooling tower. The water is then pumped back into the steam generator and the cycle begins again. The water-steam cycle corresponds to the Rankine cycle. More details