The history of the motorcycle begins in the second half of the 19th century. Motorcycles are descended from the "safety bicycle," a bicycle with front and rear wheels of the same size and a pedal crank mechanism to drive the rear wheel. Despite some early landmarks in its development, the motorcycle lacks a rigid pedigree that can be traced back to a single idea or machine. Instead, the idea seems to have occurred to numerous engineers and inventors around Europe at around the same time. 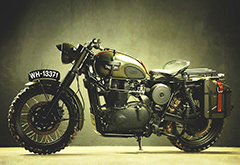 In the 1860s Pierre Michaux, a blacksmith in Paris, founded 'Michaux et Cie' ("Michaux and company"), the first company to construct bicycles with pedals called a velocipede at the time, or "Michauline". The first steam powered motorcycle, the Michaux-Perreaux steam velocipede, can be traced to 1867, when Pierre's son Ernest Michaux fitted a small steam engine to one of the 'velocipedes'.

The design went to America when Pierre Lallement, a Michaux employee who also claimed to have developed the prototype in 1863, filed for the first bicycle patent with the US patent office in 1866. In 1868 an American, Sylvester H. Roper of Roxbury, Massachusetts developed a twin-cylinder steam velocipede, with a coal-fired boiler between the wheels. Roper's contribution to motorcycle development ended suddenly when he died demonstrating one of his machines in Cambridge, Massachusetts on June 1, 1896.

Also in 1868, a French engineer Louis-Guillaume Perreaux patented a similar steam powered single cylinder machine, the Michaux-Perreaux steam velocipede, with an alcohol burner and twin belt drives, which was possibly invented independently of Roper's. Although the patent is dated 1868, nothing indicates the invention had been operable before 1871.

In 1881, Lucius Copeland of Phoenix, Arizona designed a much smaller steam boiler which could drive the large rear wheel of an American Star high-wheeler at 12 mph. In 1887 Copeland formed the Northrop Manufacturing Co. to produce the first successful 'Moto-Cycle' (actually a three-wheeler). More details

Motorcycle engines are typically two-stroke or four-stroke internal combustion engines, but other engine types, such as Wankels and electric motors, have been used in small numbers. Although some mopeds, such as the VéloSoleX, had friction drive to the front tire, a motorcycle engine drives the rear wheel, power being sent to the driven wheel by belt, chain or shaft. Most engines have a gearbox with up to six ratios. Reverse gear is occasionally found on heavy tourers, for example the Honda GL1600, and sidecar motorcycles, such as the Ural. The rider changes gears on most motorcycles using a foot-pedal and manual clutch, but early models had hand-levers. More recently, some have automatic or semi-automatic gearboxes. More details