Juan Carlos I is a multi-purpose amphibious assault ship in the Spanish Navy (Armada Española). Similar in role to many aircraft carriers, the ship has a ski jump for STOVL operations, and is equipped with the AV-8B Harrier II attack aircraft. The vessel is named in honour of Juan Carlos I, the former King of Spain.

Juan Carlos I plays an important role in the fleet, as a platform that not only replaces the Newport-class LSTs Hernán Cortés and Pizarro for supporting the mobility of the Marines and the strategic transport of ground forces, but also acts as a platform for carrier-based aviation replacing the now withdrawn aircraft carrier Príncipe de Asturias. 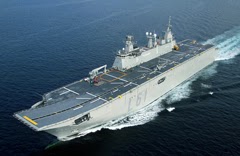 For the first time in the Spanish Navy, the ship uses diesel-electric propulsion, simultaneously connecting both diesels and the new technology gas turbine powerplant to a pair of azimuthal pods.

The complement of Juan Carlos I ship is around 900 naval personnel, with equipment and support elements for 1,200 soldiers. Multi-functional garage and hangar space on two levels covers 6,000 m2 (65,000 sq ft), with capacity for 6,000 tonnes load on each level. A stern well deck measuring 69.3 by 16.8 m (227 by 55 ft) can accommodate four LCM-1E landing craft which can beach-deliver non-swimming ground vehicles like tanks and four RHIBs, or one Landing Craft Air Cushion plus Assault Amphibious Vehicles. More details

The Longest Tunnel in The World